Okay before you read to much into the title not this isn't a post about my love of the band Journey.  I know it's been quite a while since I've graced the sports card blogging world. Since my last post I've found a job , had a change of heart and have been fairly busy.  It's not that I haven't wanted to but I've just not been motivated or taken the time to do a write up.  Well today I figured I might as well catch up.  For a while I use to be into sending out TTM Request I haven't sent one in around 3 years so I was quite shocked when I saw a small envelope featuring my sloppy handwriting. I honestly couldn't imagine who it was from  "Charlotte, NC" was stamped on it.  I thought maybe an AHL player in the Carolina Hurricanes system... then I remembered the Charlotte Checkers weren't even an AHL team 3 years ago.  Maybe a NASCAR driver? 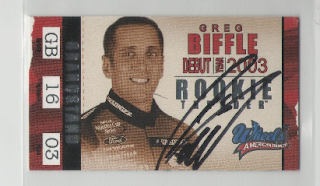 I was shocked to actually get this back. Greg Biffle is one of my favorites I've followed his career since his rookie year in the then Busch Series. After the initial shock wore off I wanted to know how long had it actually been?

1072 Days, It's weird to think how much has changed since. I sent that TTM.
That was just a few things that have happen I know I'm missing some important ones.  Regardless the main message I'm trying to get across is never lose hope in your TTM Request because when you least expect it you'll get one in the mail!