HOF Auto and the Best of the Rest!

Hey guys sorry for my long overdue post. I've just busy with some work around the house and job searching so I haven't had a ton of free time but I finally figured I needed to post! I will not waste your time and go straight into the cardboard! 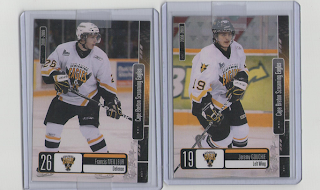 Francis Meilleur, Jeremy Gouchie (one of the best names in hockey) 08-09 Cape Breton Screaming Eagles cards.  These 2 QMJHL graduates are in their first season of professional hockey! 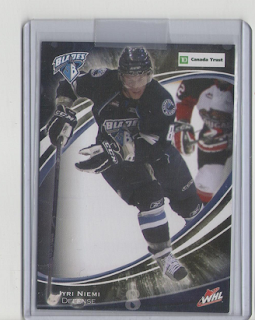 This last Road Warriors card is Finnish defender Jyri Niemi a Islanders Draft Pick (oddly the only player ever to be traded from Long Island to the Rangers , who currently hold his rights) I love this card design from 08-09 Saskatoon Blades.

This blog will mainly feature Baseball cards but I hope the occasional Hockey Card does not offend. Sadly the Road Warriors do not issue out Card sets so I have to pick up the players past cards but it's fun the team issue stuff can be quite the chase I have a lot of fun with it! 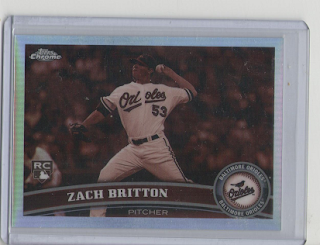 This Sepia Refractor(75/99) of Zach Britton was just a card I picked up on E-bay loved the look!  William from Foul Bunt has first dibs if he want's the card if not I might keep it. 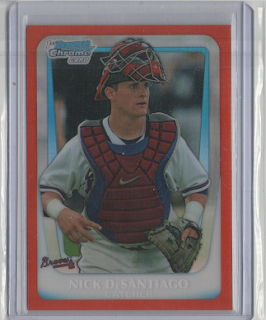 I found this card on E-bay for a solid deal from the new 2011 Bowman Prospects. Orange Refractor 11/25!  To be honest with you I don't know a ton about Nick DeSantiago but for the price I figured it was worth it. After some research he was drafted out of JUCO and is not projected as a big time player but does have some potential!  This is going directly into my Braves PC! 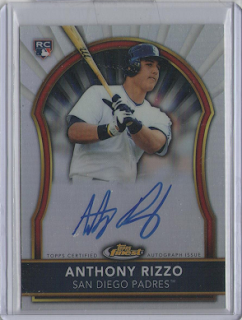 I was extremely happy to acquire this card. Actually my 2nd Rizzo auto but my first solo auto (the other is a dual auto with Daivd Mailman)  These Finest cards are the cream of the crop as far as looks I am tempted to do the set maybe if I find consistent employment I might go for it!  Rizzo played here with the Drive when he was Red Sox property one of my favorite players to come through here! Bizarrely he was traded for the 2nd time this Winter to the Chicago Cubs. I think this guys potential is off the charts in 2 or 3 years I think he's a top tier first baseman!  This card is a refactor version #d  220/499 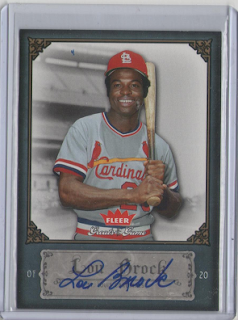 I finally picked up my Lou Brock auto. I've always wanted his autograph he was way before my time but I've always really liked to see footage and photos of him playing.  I had another card in my cross hair it was a Panini Hard Signed autographed card. I am not the biggest fan of sticker autos but the fact that this card featured Cardinals Logos (unlike the Panini) and was roughly 60% cheaper. I went with this one! Very happy I did.

Well that's all folks just a few more things. I should have a  Back To the Binder! post within the next week. Is there anything else you'd like to see me post?  I have my ideas but I find it better when other people join me and we can create something awesome!   Thanks for Reading!